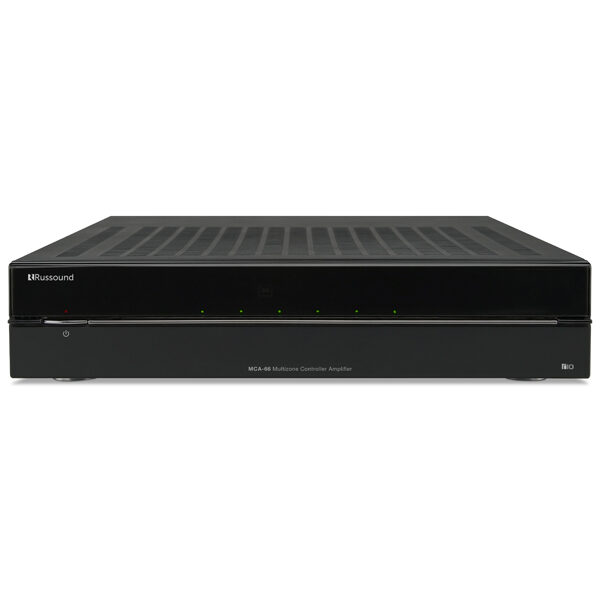 Russound’s new MCA-66i Multi Room,Network Controller delivers six zones of stereo audio from any of six sources. The MCA-66i is a responsive and effective controller/amplifier providing distinctive and outstanding distributed audio performance, whilst whilst giving 40 watts of high fidelity power per zone.

The MCA-66i offers stereo audio distribution to six independent zones as well as having custom audio settings, Party mode for entertaining, Do Not Disturb, source and zone linking, and All On/Off participation are standard features. The controller also has a system clock with an alarm and sleep timer, home cinema triggers, routed and common IR outputs, and zone specific 12VDC trigger outputs.

The latest generation of C Series controller/amplifiers have fantastic new features all detailed below.

More Power, the upgrade C Series offer more power resulting in a more powerful , responsive processor than its predecessor. As a result of the enhanced power, the controller can communicate twice as fast with other network devices like the DMS-3.1 or the My Russound App, delivering an exceptionally satisfying experience for the user.

Bluetooth,;now with the additional of of a dedicated Bluetooth receiver module embedded in the controller unit you can remotely situate a Russound BTC-1x receiver module in a suitable zone(up to 280ft/85m maximum distance)and this can be shared with the rest of the system, or utilised as a dedicated ‘local’ source input for that zone alone. This means that simple cost effective streaming from mobile devices (Android or iOS) can be simply introduced and used pretty much out of the box – and without a big outlay.

IR Learning facility,this is the most exciting upgrade for the MCA-66i, the addition of several dedicated digital inputs. The MCA-66i already has the capability to learn in IR codes for any non-Russound source components. But with the addition of the digital inputs alongside the analogue inputs there is the flexibility of integrating products ike Apple TV’s or Satellite boxes that only have dedicated digital outputs. This is also perfect for ensuring the minimum of lip-sync issues if you are synchronizing HD video switching alongside your Russound audio system with a Myro:Bridge for instance.

Russound MRA-3 ‘My Russound’ App is now available. This is specifically for C Series products and X5 Multi-Room systems. The App is fully intuitive and very easy to control via iOS and Android devices, no need to leave your chair, once you are connected you are in full control with your smart device. The “My Russound” App offers seamless control of both their C-Series Controller’s and the new X5 streamer/controller/amplifier and is free of charge, so once you have downloaded the from the iTunes store or the Google Play Store you’re ready to go.

When the App is used in conjunction with the DMS-3.1 and an MCA or X5 controller as a stand alone system cover art, full media meta-data and content browsing is enabled and displayed. This means that internet radio, music from USB devices/drives & music on indigenous computers on a LAN can all be accessed seamlessly, and controlled via the ‘My Russound’ App on your Android or iOS device. In addition to this if you have an IR learning device any IR driven third party device such as your TV, Satellite/Sky box or Blu-ray players programmed into your C-series or X5 system, can also be seamlessly controlled. Unlike other systems out there – you don’t need anything else. No extra boxes…just a reliable network infrastructure and you are up and running with full control from the MRA-3 App for Apple iOS devices or Android smart phones or tablets.

Installation,for installers; the MCA-66i has both a front USB and Ethernet port for programming ease. The controller can be configured via free programming software, and also boasts an easy to use front IR learning centre for use in programming with all IR driven source devices. In addition, the MCA-66i has RS-232 and also more importantly an Ethernet port allowing for seamless integration with 3rd party control/home automation systems, with Russound’s network based control protocol called ‘RIO’.This feature has been generously enhanced by Russound as the MCA-66i forms part of the new Russound C-Series generation it can now be seamlessly integrated into KNX systems with the new KNX-RIO-1 gateway.

Please Note: This MCA-66i product cannot be sold online, if you are a certified installer please call to purchase. This is why we cannot offer click to buy. But please call for competitive pricing and installation details.

There are no reviews yet.

Thank you for your interest in our website. At this time of COVID 19 restrictions, we are doing our best to process all orders as quickly as possible. But there may be some unavoidable delay. Please accept our apologies. Dismiss